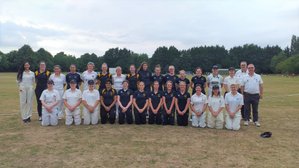 MCC snatch victory from the jaws of defeat

As the All Stars and youth cricketers began to arrive at Jordan Hill for Friday evening training,the real excitement was arguably happening out in the middle.

With one wicket in hand, Oxford CC Womens 1st XI needed only twelve runs to win against the MCC. Despite Lucy Taylor and Emily Shelley’s hopeful last-wicket stand, including a crunching pull shot that raced away to the boundary, MCC ultimately emerged as the victors, winning by just four runs. The day began with the MCC winning the toss and choosing to bat. However, they quickly succumbed to the opening attack of skipper Megan “Metronome” Jones and Isobel Kirby, losing wickets in quick succession. As the very first ball of the match was bowled, Jones picked up a wicket, with Kirby taking a lightning-fast catch at gulley. The first over, in fact, was a double wicket maiden for Jones - by no means an easy feat.

The pair continued to apply pressure on the MCC, with Kirby providing tight, economical bowling and Jones’ swing constantly causing agony for the MCC. What followed may have been one of the quickest five wicket hauls we have seen, the score after eight overs being 10-5. Emily Shelley and Lucy Taylor worked hard with the ball, and Shelley picked up a wicket in the thirteenth over. Kirsty Gregor and Charlotte Hayes also bowled well, restricting the scoring options and frustrating the MCC, but were unlucky not to get the breakthrough wicket.

On came Ridhi Kashyap, whose first two overs of spin saw the MCC struggle to find the gap. With the second diving catch of the game for keeper Numa Shah, Kashyap claimed the wicket, shortly followed by yet another in the next over – an incisive in-swinger from Genny Porter. This took the score to 86-8. After a break for lunch, the Oxford Womens side were determined to bowl out the visitors, hindered only slightly by the fact they had eaten perhaps too much tiramisu.

The Oxford team were well supported by Lucy Crouch, Ruby Jamieson, Charlotte Hopkins and Ella Robinson, providing excellent enthusiasm and energy, both in the field and from the sidelines. Following superb spells from Porter, Kirby and Jones, the MCC finally declared with a total of 156, Jones finishing with outstanding figures of 6-26 from her thirteen overs.

The opening partnership of Porter and Shah was a real highlight of the match, beginning with a bang, scoring 54 from the first five overs of the Oxford Womens innings. Porter was in fine form, punishing any full tosses and balls down the legside to the boundary, and Shah ensured that the quick singles (and in some cases, threes!) were taken, with classy cover drives being worked through the fielders. From their strong start, the pair continued to work the ball into gaps, tiring out the MCC players, and pouncing on any loose balls thrown at them. Porter quickly hit her fifty, having faced just thirty-four balls, and after eighteen overs, the Oxford total was 122, without loss of any wickets. With Shah and Porter cruising along, a win for Oxford was looking almost certain by every second. However, in the nineteenth over, Porter was unlucky to be bowled, and Shah was dismissed shortly after.

Despite such a dynamic and positive start to the innings, wickets quickly tumbled, and Oxford found themselves nine wickets down by the 27th over. Needing only twelve, the last-wicket partnership of Shelley and Taylor made a valiant effort to hit the winning runs, but with a catch at mid-off to end the game, the MCC won what was a brilliantly entertaining and enjoyable match!

Many thanks go to Ros Porter for all her hard work in ensuring the smooth running of the day, our sponsors RioMed Ltd, our umpires and scorers for the day, and to the MCC for such a great game of cricket.